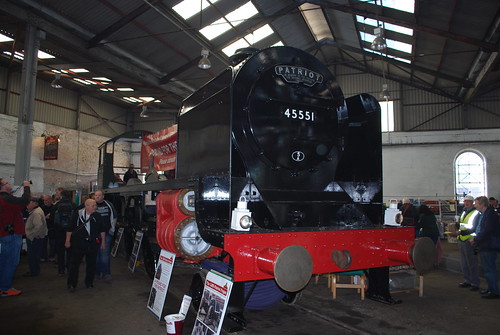 With Remembrance Day approaching, it seems appropriate to start this update with The Unknown Warrior. The Patriot was on display at the Barrow Hill Roundhouse’s LMS Gala on September 25th to 27th, and has since been moved to Tyseley for the fitting of cylinder and valve liners, plus the bogie which has been assembled there. The above photo (by Hugh Llewelyn on Flickr) shows the locomotive, which was re-wheeled and had its smokebox and deflectors re-fitted for its travels, at Barrow Hill; this one shows it at Tyseley.As can be clearly seen in the pictures, the cylinders have now been permanently fitted, as have the motion brackets, motion girders and frame stretchers. This work involved the discovery that further holes and slots were needed on the left-hand side of the locomotive for rod runs, the lubrication system and drain cock operating gear; these were not evident on the original drawings, but are present on Jubilee and Royal Scot engines.

Work has continued on the many donor parts that will be used on the Patriot: refurbishment of the legacy motion parts is involving many hours of cleaning by hand, while the locomotive and tender brake cylinders from ‘Barry 10’ LNER-built 8F 48518 (whose boiler is being used on the County) are being refurbished at Harco engineering; the regulator and J-pipe from 48518 have also been obtained for use on 45551. However, other ex-8F brake components that the group had hoped to acquire have been sold to another project. Many new parts are recently arrived, on their way to completion or on order – this engineering update provides plenty of detail.

In respect of the boiler, at Tyseley the forming blocks for the outer firebox steel flanged plates have been formed and the doorplate block cast. Meanwhile, at LNWR Crewe the inner firebox crown and side sheets are being prepared for welding. A meeting has been held to plan the boiler build up to completion in December 2016.

The project has also published interesting details of the archive-trawling necessary for a new build project, and some recent progress made on that front. Searches at the National Railway Museum have turned up a further 100 drawings of either the Patriot design or related locomotives that provide detail suitable for use on the Patriot. The archives of the North British Locomotive Company, now held by Glasgow University, have also been consulted: NBL built the first 50 Royal Scots, and the archive has proved to hold 55 drawings that will be useful for the Patriot.

Even where clear original drawings exist, every component is being drawn in 3D CAD, sometimes with new but more traditional drawings accompanying this for the use of manufacturers. So, for instance, the brake gear has been drawn in CAD using measurements from 5596 Bahamas, which can now be compared to the original drawings of the Royal Scot brake system.

The AGM will be held this Saturday, Octobr 31st, at Kidderminster Railway Museum.

1014 County of Glamorgan
The latest update on the County covers work in July and August, as usual with plenty of photographs.  The frames are now back at Didcot, with work at Tyseley having been completed. The next milestone will be rewheeling, pending checks on all the necessary components and a slot being available on the wheel-drop; this is expected late this year or early next. Spring 2016 is now the target for completion of the firebox, following a positive meeting in Crewe; it was also agreed that work on the smokebox and barrel would be on a labour-only basis from Crewe, with the project supplying the components.

The news update includes interesting discussion of the challenges imposed by the archive status of drawings for the class: a drawing for the preferred double chimney No 15 OA boiler (with 3 row superheater) has not been located. The project group is therefore developing options to use and when necessary adapt the relevant existing drawings. Patterns, original drawings and 3D CAD drawings are being variously pressed into service, sought and produced as necessary for other boiler-related components. On the tender, substantial progress has been made on riveting and the fitting of new and refurbished components.

6880 Betton Grange
The donor boiler from Willington Hall has been lifted on to a low wagon, to be moved into Llangollen yard ahead of de-tubing. Good progress on the boiler appeal means that the group hopes to place the order for the work to start in about a year’s time. Elsewhere on the locomotive, new components including slide bars, all the sandboxes and the overhauled reverser have been delivered. The front footplating is now nearly complete. A steaming date of 2018 remains the aim.

3MT 82045
News updates for September and October outline continuing good progress on the 3MT tank engine. The South Devon Railway has been instructed to proceed with building the firebox, and Barnshaws in the Black Country have been commissioned for the boiler barrel. The necessary copper has been ordered and will be stored under tight security, bearing in mind the theft of copper from the project in January 2011.

This project is another where individual components are available for sponsorship: the focus so far has been on motion parts, but the opportunity to sponsor the two injectors has also been made available.

Among the many items of progress on specific components are the machining of the axleboxes and smokebox door dart and the white metalling of the driving wheel axleboxes.

72010 Hengist
All of the components for the Clan that were stored at Shillingstone have now been retrieved and are in store at Burton on Trent awaiting cataloguing. The smokebox assembly has been delivered by Ian Riley and Son in Bury (visible here on Twitter) and the slide bar brackets are now complete and await machining.

2007 Prince of Wales
Fundraising for 2007 continues to make good progress, with £2million of the necessary £5million now either raised or pledged. The project is also offering a dedicated donations scheme, with a list of specific components available for sponsorship announced seemingly weekly on Facebook. The scheme is open to existing founders, covenantors and Boiler Club members of the A1 Trust or P2 Company.

61673 Spirit of Sandringham
The frames of 61673 have been delivered to Llangollen and temporarily erected prior to the correct stays becoming available. They can be seen in this photo on Facebook. The project’s AGM was held on September 19th, and reported on matters included the full machining of the frames and buffer beam.

61662 Manchester United
The Footballer’s tender and cabsides have now been painted and the numbers and crests applied. The group has been navigating the notoriously difficult waters of what shade constitutes British Rail’s ‘Brunswick Green’: their research suggests that BR in fact only  used the term ‘dark green’, and the international colour standard they consulted listed three different shades called Brunswick Green – light, mid and dark. The dark variant has been applied.

G5 1759
The last open day for the G5 is planned for November 7th. It is hoped that the completed front wheelset will have returned from South Devon by then. Other progress has included the straightening of the motion bracket, which can be seen in this picture – it is now ready for machining and then fitting to the frames.

F5 789
On completion of machining of the F5’s cylinder block halves, it was found that their steam port faces were pitted. They have been repaired by cast iron welding, and are now back at Harco for final machining and inspection. Design work continues on the frames: the decision has been made to change the horn guide design from the original wedge to the later parallel pattern; the valve gear and motion bracket will be the next areas of attention.

GCR 567
At the GCR 567 supporters day on October 24th, the locomotive’s frames were unveiled and sponsorship secured for the four horn guides.

342424 Beachy Head
[EDIT: as luck would have it, the Brighton Atlantic group published their latest news update a few hours after this round-up was sent live, which includes numerous of the below details plus information on, and photos of, the fitting of the cab.] In the absence of an official update on the Brighton Atlantic website, the following information is drawn from this précis on National Preservation. Among other work on the boiler, ultrasonic testing of the stays has commenced; no broken stays have been found. The elaborate work necessary on lubrication runs and piping up the drain cocks is also underway. The splashers have been completed, riveted to the running plate and completed. The outside cylinder end covers have been fabricated.

35011 General Steam Navigation
With thanks to Simon for pointing it out in the comments on the last post, the project to restore and ‘de-build’ 35011, as mentioned in the last update, now has its own website. The latest news update states that the locomotive’s owner has indicated he will place the engine into the trust’s care, if it develops sufficiently to carry the project. If this happens, New Build Steam expects to cover it as a new build project comparable with the numerous GWR projects using existing locomotives as a base, but for now will keep a watching brief. The search for a new base for 35011 remains the group’s first priority.

Tata Steel
Over on our Facebook page, Tayger Farrow asks a topical question: what might be the impact on new build projects of the growing crisis in the British steel industry, and in particular the proposals to reduce activity at Tata Steel in Scunthorpe? The plant has supplied frame plates to numerous locomotives, including 61673 Spirit of Sandringham, 2007 Prince of Wales and 2001 Cock o’ the North, but is now facing the prospect of 900 job losses and the mothballing of its plate mills. Mills are also due to be mothballed at Dalzell in Motherwell, and Clydebridge in Cambuslang, near Glasgow. Across the UK, the loss of more than one in six jobs in the steel industry as a whole has recently been announced.

We would welcome informed comment on the possible ramifications of these developments. Clearly, steel prices have fallen globally and there is plenty of supply worldwide; but will this necessarily be readily accessible to small-scale projects such as new build steam locomotives? Possibly so – examples of successful construction of major components for such engines do exist, not least the boiler of 60163 Tornado in Germany. In a niche sector driven by passion and enthusiasm rather than a cool-headed aim for profit, however, it undoubtedly grieves enthusiasts for British industrial heritage to see such work sent offshore.

This site uses Akismet to reduce spam. Learn how your comment data is processed.